FIU's global footprint in Colombia highlights the many dimensions of successful collaborations with Colombian partners.

Whether from a student, faculty or institutional lens, relationships between FIU and Colombia have grown and fortified significantly over the years. The FIU Global Strategy 2025 views these past successes as the ideal springboard for a more intentional framework that enables continued and expanded win-win collaborations.

This page is devoted to showcasing current efforts and established connections with Colombia, while also announcing new initiatives. If you are interested in learning more, please contact FIU Global at global@fiu.edu.

We are inviting SIOs, deans, vice provosts, scientists and faculty from any Colombian institution to join us for an open dialogue on scientific and academic collaborations.

Specific topics of interest include: bridge construction, aging structures and development of guidelines for managing bridges; innovative forensics to search for the missing; safeguarding against viral outbreaks and superbugs; public policy and national security; COIL and more (for details, see agenda).

The registration is free. For questions, please contact FIU Global at global@fiu.edu.

The Tropical Rivers Lab, lead by FIU Professor Elizabeth Anderson, focuses on inter-institutional collaboration for science and capacity building to address challenges of Amazon conservation. Its Partners for Conservation in the Colombian Amazon project included multiple universities and 20+ other organizations resulting in 15 graduate fellowships to Colombian students, 23 research awards, and 100+ people participated in training courses.

Living Andean Rivers: collaborators in all Andean-Amazon countries examine and communicate the importance of rivers from a social-ecological systems perspective. Within Colombia, the primary collaborator is the Pontificia Universidad Javeriana, which is designing and running a continuing education program for environmental managers on Andean Amazon river science, conservation and management.

Amazon Waters / Amazon Citizen Science: led by Wildlife Conservation Society aiming to understand fish migrations and environmental conditions across the Amazon through a participatory approach. Colombian collaborators are from the region around Leticia-Puerto Nariño.

FIU and Universidad Católica de Manizalez (UCM) have been awarded a grant from the 100K Strong Americas Innovation Fund as partners in promoting Collaborative International Online Learning (COIL) and mobility.

The project Designing Alternative and Digital Strategies to Build US-COL Multidisciplinary Intercultural Identities will engage students at FIU and UCM in three COILs exploring alternative and digital strategies for expressing hybrid US-Colombian identities in the arts, business, and communications. Building on COIL collaborations, five students and two faculty from FIU will travel to Manizales to participate in the “Odyssey Ad Creative Bootcamp” and five students and two faculty from UCM will join FIU partners in Miami to create a public exhibition of works created throughout the project. 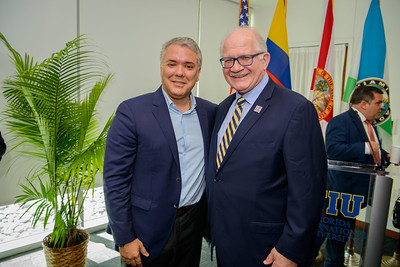 In 2018, FIU had the privilege to host Colombian President Ivan Duque during a visit to Miami. President Duque received the "FIU Medallion of Courage" and discussed many topics such as economic and political challenges in Colombia, as well as the concept of peace within a nation.

Dr. Andrea Fanta, associate professor in the Department of Modern Languages, is the author of Residuos de la violencia. Producción cultural colombiana 1990-2010 (Universidad del Rosario, 2015) and the co-editor of Territories of Conflict: Traversing Cultural Studies in Colombia(University of Rochester Press, 2017). Dr. Fanta serves as the 12th president of the Asociación de Colombianistas, a non-profit academic organization with more than 200 humanities and social sciences scholars from around the globe. Colombianistas publishes Revista de Estudios Colombianos (REC) a biannual, peer-reviewed and indexed academic journal founded in 1986 to promote academic research on Colombia in the humanities as well as the social sciences with a view to engage in a multi-disciplinary academic and cultural dialogue.

Center for the Administration of Justice

In 2005, the Colombia Justice Reform and Modernization Program (2005-2009) was initiated as SIPA's Center for the Administration and Justive was awarded a $19.7 million contract from USAID for the implementation of Colombia's new Criminal Procedure Code, which included the creation of a victims service center for victims of violent crimes, the promotion of civil society participation in judicial reform, and more.

For more information on the collaborative project, go to: https://caj.fiu.edu/projects/latin-america/colombia/