Salignant Waters, Malignant Words - a poetic exchange across the oceans

FIU Global is pleased to invite students, faculty, staff, alumni and the public to multiple events celebrating international education. The events are free and open to the public. No rsvps are required unless noted otherwise. Also visit the comprehensive schedule of International Education Week 2021 events around campuses.

Since its establishment in 1946 by Congress, the Fulbright Program has given more than 400,000 students, scholars, teachers, artists, and scientists the opportunity to study, teach and conduct research, exchange ideas, and contribute to finding solutions to shared international concerns in over 160 countries.

FIU faculty and students have been active participants as Fulbrighters across the globe for many years. FIU's most prominent Fulbrighter is our very own president, Dr. Mark B. Rosenberg, who conducted research as a Fulbright scholar in Honduras in 1983.

Meet current Fulbright visitors and Fulbright alumni from all across the world to learn how this flagship program is advancing or advanced their academic career. Our Fulbright program advisors and campus liaisons will be on site to guide you further as well.

Since its establishment in 1946 by Congress, the Fulbright Program has given more than 400,000 students, scholars, teachers, artists, and scientists the opportunity to study, teach and conduct research, exchange ideas, and contribute to finding solutions to shared international concerns in over 160 countries.

FIU faculty and students have been active participants as Fulbrighters across the globe for many years. FIU's most prominent Fulbrighter is our very own president, Dr. Mark B. Rosenberg, who conducted research as a Fulbright scholar in Honduras in 1983.

Meet current Fulbright visitors and Fulbright alumni from all across the world to learn how this flagship program is advancing or advanced their academic career. Our Fulbright program advisors and campus liaisons will be on site to guide you further as well.

John Lang - a book discussion with the author

John Lang: Wanderer of Hindoostan, Slanderer in Hindoostanee, Lawyer for the Ranee

John Lang (1816-64)  is what the Australians call a 'larrikin' character - rambunctious, irreverent, and one who believed he had a covenant with destiny. A celebrated lawyer amongst the Indians for having won a tough case against East India Company, he was invited by the Ranee of Jhansi to be her lawyer. Lang considered himself much more of a writer and journalist than lawyer. In these departments too, he was quite a nightmare for the British gentry and East India Company. He wanted to be india's Dickens, which later Rudyard Kipling turned out to be. Lang is as tall as either of these figures, but is quite lost to history. He's buried in Camel's Back Cemetery. Like camels store water in their back, the backyard of this eponymous cemetery has many colourful stories stored, waiting to be told.

Author Dr. Amit Ranjan is Fulbright Scholar-in-Residence at Florida International University (FIU) for 2021-22. Amit was a Fulbright scholar previously as well, in 2019-20, and in 2015-16, also at FIU. He has also been a recipient of Endeavour Fellowship of Australia, as also the Inlaks Research Grant. Apart from this book, he also has a poetry collection titled ‘Find Me Leonard Cohen, I’m Almost Thirty’ (2018). Upcoming publications include  a non-fiction work on Mughal prince Dara Shikoh; another collection of poems; and an academic work about colonial writers. In India, he is an Assistant Professor of English at NCERT, New Delhi.

Prof. Stephanos Stephanides, a poet, essayist and memoirist, translator, ethnographer, and documentary filmmaker, will be joining this discussion. 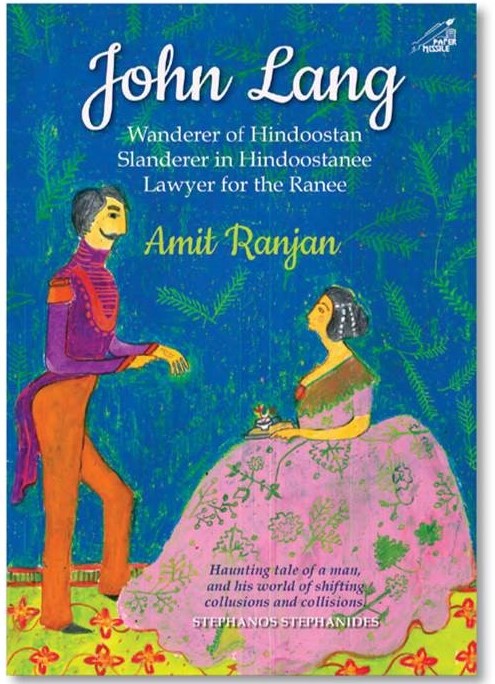 The workshop will be led by Stephanos Stephanides who is visiting FIU during International Education Week with sponsorship from the Ministry of Education, Culture, Sport and Youth of the Republic of Cyprus.

The workshop will begin with the screening of the film Poets In No Man's Land, a 20-minute film documentary produced and directed by Stephanos Stephanides with film-maker Stephen Nugent. The film documents a week-long poetry and translation workshop in 'no man's land', in the divided city of Nicosia, Cyprus. ‘No Man's Land’ aka the “Dead Zone” refers to the UN buffer zone of the divided island nation. Participants were poets working in a diversity of European languages and translating each others' work mediated through English or Spanish when they did not speak each others' languages. The film features poetry readings, dialogues, discussions, and interviews on poetry and the poetics of translation as seen through the metaphor of 'no man's land', freely and broadly interpreted. Eight languages are used in the film and there are subtitles in a choice of four languages.

Stephanos will talk about the making of the film and its cultural context and would like to invite creative writers and literary translators at FIU to join him in exploring the ideas of the film in their own life, language and cultural context. The objective will be to elicit a diversity of participants and of approaches to language, translatability and culture, borders and territories. Participants will write a short piece of creative writing in any genre, a short poem or a short piece of prose, taking the idea of no man's land in any direction that interests them and working interactively across languages when necessary. The film can be viewed on YouTube beforehand for participants who want to come prepared beforehand with their piece of writing. Participants will be filmed presenting their work and those who write something after the workshop can film themselves and send it to Stephanos later. The film screening and general discussion will be open, but for practical purposes the active workshop participants should be about ten people.

Stephanos Stephanides is a poet, essayist and memoirist, translator, ethnographer, and documentary filmmaker. He is fluent in English, Greek, Spanish and Portuguese, and conversant in French and Italian. Selections of his poetry have been published in more than twelve languages. He is an honorary Writing Fellow of the International Writers Program of the University of Iowa.  He was awarded first prize for poetry from the American Anthropological Association, 1988, and first prize for video poetry for his film Poets in No Man’s Land at the Nicosia International Film Festival.  He has served as judge for the Commonwealth Writers Prize (2000, 2010) and is a judge for the Commonwealth Short Story Prize (2022). He is a Fellow of the English Association (UK), and Cavaliere of the Republic of Italy. Representative publications include Translating Kali’s Feast: the Goddess in Indo-Caribbean Ritual and Fiction (2000), Blue Moon in Rajasthan and other poems (2005), and most recently The Wind Under My Lips (2018). His documentary films include Hail Mother Kali (1988) and Kali in the Americas (2004). www.stephanosstephanides.comstephanosstephanides9@gmail.com

Who is invited?
Budding, aspiring, and established writers and literary translators - staff, students, or anyone the spirit calls and feels they can take from and give something to the workshop.

RSVP is required
The workshop will be limited to 10 participants due to its unique format. RSVPs to global@fiu.edu. Your participation will be confirmed prior to the day of the workshop. 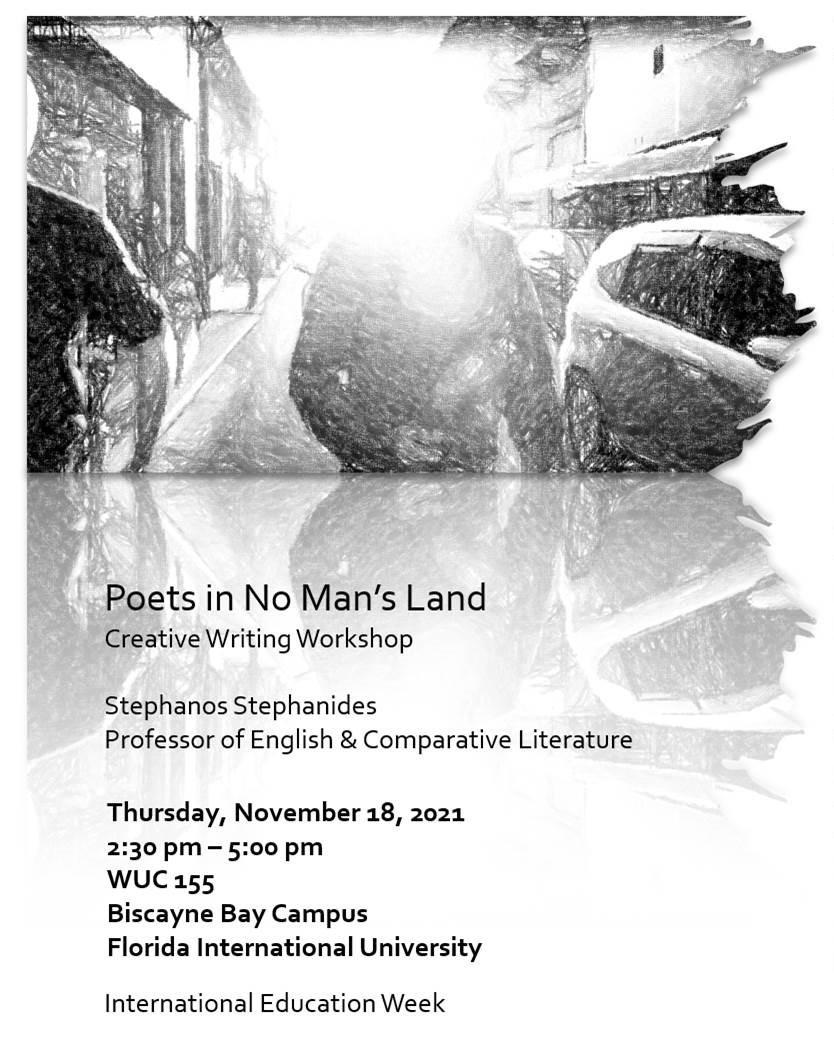 Salignant Waters, Malignant Words - a poetic exchange across the oceans

“Cast thy bread upon the waters, for you will find it after many days.” Ecclesiastes 11:1/ King James Bible

What holds for ‘bread’, also holds for ‘word.’ Stephanos Stephanides and Amit Ranjan, from Cyprus and India respectively, are collaboratively working on literatures of the ocean; and the continuum and fragmentation caused by the waters salignant (it’s a concocted but phonologically coherent word, though used in medical jargon). Both have extensively written poems about the ocean and commotion that it causes within one’s psyche and memory.

Join us for an afternoon of poetry about sea-ing, see-ing, and other matters of being. After the poems of Stephanos and Amit, and a discussion moderated by Dr Carlos Grenier, there will also be an open-mic for poetry enthusiasts.

Prof. Stephanos Stephanides was born on the Mediterranean island of Cyprus. His life and travels have taken him from the Mediterranean Sea to the Caribbean Sea, from the North Sea to the South CHina Sea,  along the Malabar and Coromandel Coast and the Bay of Bengal.  His friend Amit Ranjan has named him 'the old man by the seas'.

Dr. Amit Ranjan works at the crossroads of literature and history - and with new paths of religious studies and education, he seems to be at a busy intersection currently. He’s also a taphophile when he has free time, which is trying to find symmetries through visits to cemeteries. Ranjan writes across genres and his recent publications are poetry collection, and a biography of a 19th century maverick. Though his life has been land-bound mostly, he has written feverishly during his time on the ocean in Sydney on the Pacific,  Miami on the Atlantic, and Bhubaneswar in Bay of Bengal. Miami has called him back thrice over. >

Dr. Carlos Grenier is a professor of Islamic Studies and Ottoman Empire at the Department of Religious Studies, and his book about the latter matter has just come out. Dr Grenier was once besotted by the black magic of the Black Sea, and grew up on the waters of Miami. He tried to escape but his bread was cast upon Miami waters, and so he found it after many days.

Come by and rest awhile! Bring your beach chair, pillow or blanket and listen to the poetic exchange or grab the mic and participate. 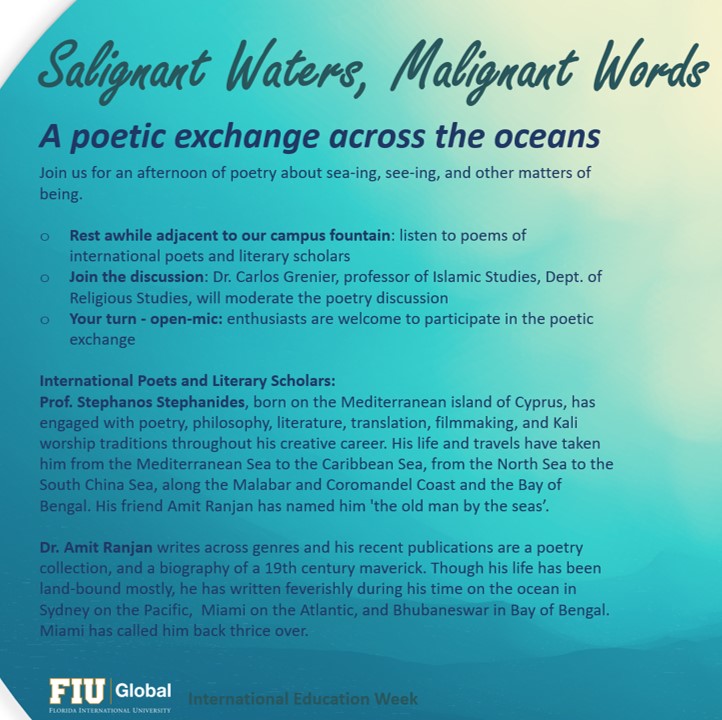